For trees affected by elm leaf beetle, including the Golden Elm and the Weeping Elm, it is important to employ appropriate treatments at the correct time to achieve long-term protection for your elm tree and avoid major leaf damage and serious overall decline.

About the Elm Leaf Beetle The elm leaf beetle is approximately the size of a large grain of rice, appearing dull green in colour early in the season, with the colour becoming more defined as the season progresses.

Adult beetles are free flying but are also known to “hitch a ride” on a vehicle. They move from tree to tree feeding and laying eggs on the undersides of the leaves. Early in the season damage is often noticed on one side of the tree, and this indicates the source of hibernating and emerging beetles.

What damage is caused by the elm leaf beetle?

The most severe damage inflicted by the elm leaf beetle occurs mainly during the larval stages of the insect’s lifecycle, skeletonizing the leaves and destroying the tree’s ability to achieve photosynthesis and produce reserves of energy that carry it through its dormant period.

Damage caused by an adult elm leaf beetle is evidenced by the leaves taking on a ‘shot hole’ appearance – and this damage continues right through the growing season. 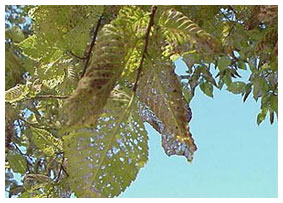 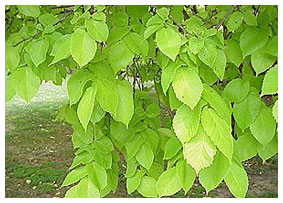 Trees can often be defoliated within a very short period of time (in some cases within a week) with high temperatures increasing the speed of the beetle’s metabolism.

What are the treatment options for controlling Elm Leaf Beetle?

The three main treatments for elm leaf beetles are: Talk to Elmsavers about the best treatment at the right time for your trees.

Our factsheet on the Elm Leaf Beetle provides further information on this destructive insect.